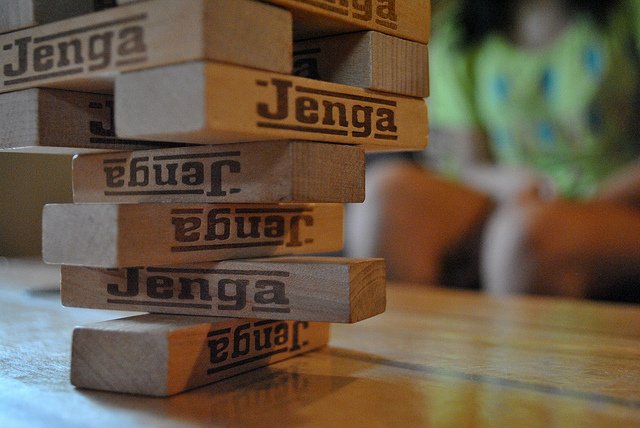 Borrowing money is like playing Jenga with your financial life: Make one wrong move and everything will come crashing down.

If you didn’t know any better, you’d think that borrowing money was the way to get ahead in life. After all, everyone else seems to be doing it. But when you examine reality through the lens of truth, you learn that debt only adds risk to your life.

If you build the tower of your lifestyle on debt, one day you could find that the risk was your undoing.

There’s a reason that the Bible warns us against debt: Borrowing money is equivalent to signing up for financial slavery. It restricts us from doing the things we want with our money. And it also amplifies the inherent risks in life to unacceptable levels.

Let’s start by talking about risk. This world we live in is a wild, uncontrollable place, and life is full of risks that we cannot control. Things break down, natural disasters occur, children get sick. People lose jobs and businesses close. Nations go to war and economies fail.

These events rage on around us, and there is very little we can do to stop them. Sometimes when these things impact us directly, they cost us a lot of money. We manage this risk the best we can by buying good insurance and saving money for emergencies. But still, life is never 100 percent risk-free.

When debt enters the equation, though, it turns this entire situation upside down.

The problem with this, of course, is that debt philosophy is based on the potential for gain in the future, but it completely ignores the potential for loss. And because this risk is an inherent part of human existence, only a fool would ignore it.

When you borrow money to buy a new car, you’re thinking “I will have enough money to make my monthly payments for the next five years.” What you’re not thinking is “This car’s value will fall faster than the balance of my loan will go down,” or “I might have a wreck that destroys this car.”

If the car’s value does dip below the balance of your loan, and you do have a wreck, then you’ll find yourself in a double mess. Not only will you be without a car, but you’ll still have to make payments on a car that doesn’t exist anymore.

This is how it really works: When we borrow money, we are assigning our future income to pay the loan back. That is fine, as long as nothing bad happens. But since life is full of risks, what we’ve really done is increase the obligations of what we have to pay in the future, without decreasing the risk of other expenses.

The net effect of this is that it actually increases risk. If you have no debt, and a disaster happens, that disaster is going to cost you money,but it’s not going to ruin you. On the other hand, if you have a lot of debt, the same disaster could wipe you out financially.

Why? Because in addition to having to clean up the disaster, you still have to make payments on your debt. You don’t have the flexibility to put the debt payments on hold while you pay for the unforeseen expense.

This is how people get into trouble. They borrow a bit of money, thinking that it’s going to help them, and they see that the payments are manageable. So they borrow a little more, and a little more, until the amount of money they have to pay out each month is equal to what they have coming in. Sometimes, they keep going beyond that, borrowing money from one institution in order to pay another one back.

This is a dangerous game. Eventually, the load of debt gets too heavy to carry. And at any point along the way, a disaster could come along and ruin the whole arrangement.

Debt and the Jenga Tower

Think of it like a game of Jenga. At the beginning of the game, the tower is relatively steady, made of wooden blocks arranged using sound architectural principles. When you borrow money to add something to your life, what you’re really doing is removing one of the stabilizing blocks from the bottom of the tower to add something to the top.

Your tower gets a little taller, but you’ve also made it a little less safe. Has this strategy really benefited you?

The cycle of debt is like a game of Jenga that gets out of hand. You borrow more and more, taking more pieces from the bottom to add to the top of your tower. The tower’s height is impressive, but its foundation becomes wobbly.

Eventually, one of the pieces that you remove from the bottom is going to cause the whole tower to collapse. And you never know which piece is going to do that until it’s too late.

Borrowing money starts a dangerous game with your finances. Don’t let your life turn into a pile of wooden bricks fallen on the floor.