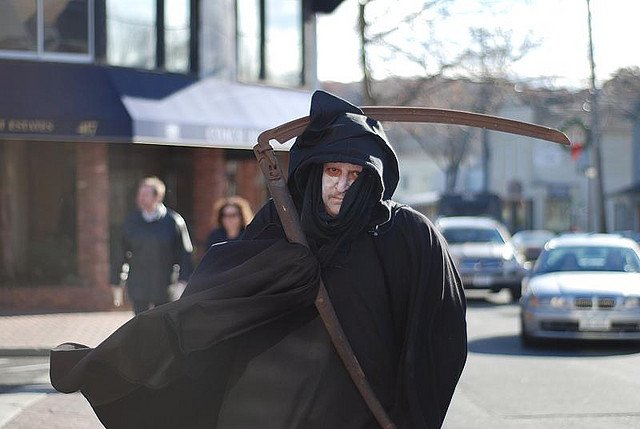 Call me the Ghost of Debt Yet to Come.

In “A Christmas Carol,” it wasn’t so much the past or future that really moved Scrooge, but the specter of how the future would turn out should his miserly ways continue. And just as the Ghost of Christmas Yet to Come showed Scrooge the horrible things that could happen int the future if he kept going the way he was, I’m here to show you some of the things that could await you if you continue to walk deeper into debt.

In case you haven’t figured it out yet, I believe that debt is a horrible thing. It makes slaves out of us and adds large amounts of risk to our lives. And while you may think that you can handle your current debt load, one or two bumps in the road of life can put you into dangerous territory. Lots of bad things can happen if you get behind on your payments, or let debts go bad altogther.

The way that lenders handle bad debts varies widely based on the kind of debt, the kind of lender and other circumstances. Here are six of the most common things that can happen if you get in over your head.

If you’re several months late on a credit card, a medical bill or some kind of other unsecured debt, many lenders will turn your case over to a collections agency. These agents buy the debt from the lender (often at pennies on the dollar), and then hound you until they can pressure you into paying up. Their tactics are often very aggressive: They’ll call your home, your workplace and your family members, and will try to intimmidate you into coming up with the money to pay them. Many of these practices border on illegal, but even the ones that are technically legal are still no fun to deal with.

If a lender or collections agency is unsuccessful in recovering a debt from you, they may eventually sue you for the money you owe them. These kind of court cases are usually open and shut: If you owe the debt legitimately, you’re going to go to court and you’re going to lose. It won’t look like a dramatic scene out of Law and Order, but it may be stressful and humiliating. If you’re found to owe the debt, the judge will rule against you and then decide how to force you to pay.

If you have money in the bank or significant assets, a court can seize those assets in order to recoup the money owed to a creditor. But if you’ve gotten in this deep, you likely don’t have extra cash or valuables lying around. In this case, a judge can garnish your wages in order to pay the debt. This means that the court contacts your employer and forces them to pay a certain percentage of your wages or salary directly to the court instead of to you. Although you’re still working full time, your take-home pay will look like you’re working part-time. And your company will have to continue to send your money to court until the debt is paid.

When you borrow money to buy something like a car, a boat or another high-priced item, the item itself serves as collateral on the loan. The papers that you sign when you take out the loan say that, if you fall behind on the payments, the bank or the lender has the right to come and seize the property. This seizure is called repossession, and it’s perfectly legal: There’s not a thing you can do to stop it. The lender or their agent will take the property and sell it to recover the money you owe them. If they aren’t able to recoup the full amount of the debt by selling the item, they will sue you for the difference.

When the repossession process happens on a home mortgage, it’s called foreclosure. If you get too far behind on your mortgage payments, the mortgage company will send you a notice of foreclosure, advising you that they are taking the house back and telling you when you must vacate the premises. When that day comes, your local sheriff will show up at the property to see to it that you leave, and hand over the keys. The lender usually turns around and auctions the house off to the highest bidder, and these auctions can bring significantly less than the fair market value of the home. If this happens, you’re stuck owing the balance, and you can be taken to court if you have no way of paying it back.

If you reach a point where you are swamped with debts that you have no way of paying back, you may be forced to declare bankruptcy. Bankruptcy can come in many forms, and the rules surrounding it vary from state to state. But in essence, you go to a judge and cry uncle. The court then seizes any valuable assets that you do have, sells them off and then divides the proceeds from that sale among your creditors. The good news is that usually this is the end of your debt: Once a court has discharged a bankruptcy, the lenders can’t pursue you for money anymore. They just take their losses and move on. The bad news is that a bankruptcy is public record and absolutely trashes your credit. You won’t be able to get a loan or a mortgage for a long time, and anyone else (like a potential employer) who checks into your background will see a big, black stain on your life’s record.

Hopefully this little peek into the future will convince you that nothing good lies down the road of debt. Do yourself and everyone else a favor and learn to live within your means.