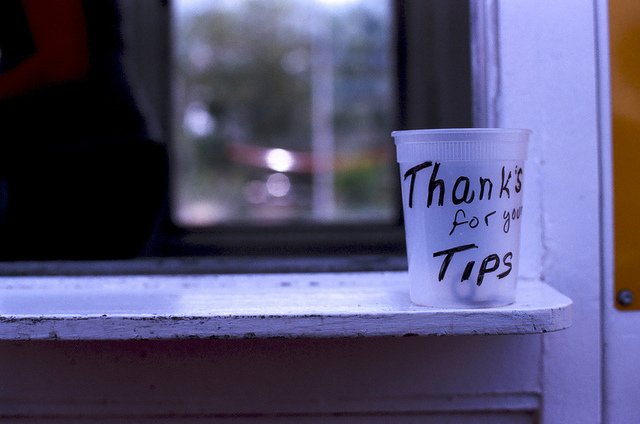 Last week, when we gave advice about navigating our out-of-control tipping culture, we expected that a few people wouldn’t like what we had to say. Today, we’re going to go into detail to talk more about why the tipping system is so flawed to begin with.

In case you missed it, last week’s article essentially said this: While it’s necessary to tip in restaurants because of the way that servers’ wages are structured, most other tipping situations that you encounter in modern life are gratuitous, manipulative and unnecessary. Tipping is great if someone has gone above and beyond your expectations to help you, or if God has moved you to show someone extra generosity. But in general, service workers like baristas, taxi drivers and hairdressers really don’t need tips.

You may disagree with me, and that’s fine (in fact, I’d love to hear your thoughts in the comments section below). But let’s look at some of the fundamental issues that make our tipping system so ineffective. Here are five reasons that tipping should be abandoned and replaced with a fair wage system.

Many pro-tipping people argue that tipping is a good thing for service employees, but from a financial management point of view I disagree. Tipping is by definition arbitrary and inconsistent. A restaurant server may bust their butts working on two different shifts, and earn substantially different amounts of money during those shifts based on the arbitrary tipping decisions of their customers. This is hardly fair for the employee: How are you supposed to budget and manage your finances well when your income depends on the capricious decisions of your customers?

For non-restaurant workers, the problem gets even worse. Some people tip cab drivers, baristas and hairdressers, and others don’t tip at all. This means it’s very difficult to predict how much money you’ll earn in a day’s work. The inconsistency of this system is bad for employees and bad for the economy in general.

The Freakonomics team pointed this out a few weeks ago in a fascinating podcast: Academic studies have found that the amount of tips that restaurant workers receive varies according to unsettling race and sex lines. White workers earn more in tips than black or Hispanic workers, and men earn more than women. And within these groups, the trends were even more disturbing: Women who were perceived to be younger and more attractive were found to earn more money than other women. All of these factors are adjusted for any perceived differences in service quality.

The bottom line on this one is that we tend to unfairly prefer young, attractive white people with our tips. This is unintentional discrimination. And because the tipping system is so entrenched in our society, it’s completely legal. By the way, the experts on that Freakonomics podcast came to the same conclusion that we do: Tipping is a senseless custom that ought to be abandoned entirely.

The unfortunate reality of the tipping culture is that the vast majority of cash tips are essentially under the table; that is, they are not reported as income, and workers pay no taxes on them. The nature of cash is that it is virtually untraceable. So when you slip a few singles to a doorman, a waiter, a cashier or some other service worker, it’s extremely easy for them to stuff that money in their pocket and never report it as income to the IRS, even though they’re supposed to. This creates a system where service workers are dodging taxes on a substantial portion of their incomes — a choice that regular wage and salary workers don’t have.

You may say that this is ultimately the fault of the individual, and I would agree with that. After all, there are some scrupulous service workers out there who do report all of their tips at tax time. But the vast majority do not. In fact, I’ve known many restaurant servers who told me frankly that their managers encouraged them not to report cash tips. And when that many individuals are cheating the system, it becomes a systemic problem that requires a systemic solution. The solution here is simple — do away with tipping.

4) Tipping is based on social pressure, not market value.

One of the most fundamental principles of our economy is that the prices that we pay for things are determined by the values of those goods or services in the general marketplace. Things that are in high demand tend to have high prices. Commodities, on the other hand, are very affordable. But tipping breaks this rule and inserts a new one. When we tip, we’re not basing our payments on the market value of the good or service that we’ve purchased. Instead, we’re paying the market value plus an additional payment to the provider based on a vague social pressure.

The truth is that nobody really knows why we tip some people and not others. Why do you tip a maid but not a plumber? Why is there a tip jar at Starbucks but not at McDonald’s? And what did cab drivers ever do to deserve tips on top of the rates that you’re already paying them to drive you around? All of these tipping trends are based on social pressure. We feel compelled to tip when someone sticks a tip jar out on the counter. But putting out a tip jar essentially amounts to begging, and it manipulates people to pay more than the market price for what they’re receiving.

Many people give tips to service workers because it makes them feel good, in a similar way that giving a gift or doing a good deed creates a feeling of satisfaction. And I’m not going to argue with you about something that makes you feel good. But ask yourself this: If you’re tipping because of customs or social pressure, is that really generosity? Or are you just playing along with society?

Giving generously is one of the most important things that we can do with our money. And sometimes, generosity may come in the form of giving a good tip. But I fear that too many people satisfy their call to true generosity by handing out tips instead of using their money to care for the hurt, the poor and the oppressed. That’s too bad, because there are people in this world that need your generosity far more than your mailman, paperboy or babysitter.

So, there are five legitimate reasons why our tipping system is screwed up. If you disagree, we’d love to hear your thoughts.