What the Bible Says About Forgiving Debt

If someone you care about owes you money, the most loving thing you can do for them is to let it go.

You loaned money to a close friend or family member, and they’re having some trouble paying it back. What should you do? God wants you to let it go. To understand why, let’s spend some time looking at what the Bible says about forgiving debt.

Personal debt can seriously threaten relationships. Debt creates an uneven relationship between two people, making one person a slave and the other person their master. God didn’t intend for us to live in that kind of unbalance with people, and the friction caused by such arrangements can actually damage relationships. If you really value your relationship with someone, forgiving their debt will help you preserve the core friendship that matters most.

But forgiving someone’s debt isn’t just a strategic relationship decision — it’s also the strong teaching of scripture. Study what the Bible says about forgiving debt, and you’ll find that it has a multitude of benefits. Today, we’re going to examine three.

Forgiving someone’s debt may help save your relationship. But Jesus takes the idea even further. He says forgiveness doesn’t just rescue a relationship, but actually makes it better.

In Luke 7:41-43, Jesus uses a story to teach Simon Peter about love, sin and forgiveness.

41 “Two people owed money to a certain moneylender. One owed him five hundred denarii, and the other fifty. 42 Neither of them had the money to pay him back, so he forgave the debts of both. Now which of them will love him more?”

43 Simon replied, “I suppose the one who had the bigger debt forgiven.”

“You have judged correctly,” Jesus said.

Jesus is making point here about sin and forgiveness, but the principles He’s teaching apply directly to finances as well. When we forgive someone, we show them love, That, in turn, stirs up love in their hearts toward us. The bigger the debt you forgive, the more love you invest in your friend’s heart. This means that when all is said and done, forgiving a debt can put your relationship on stronger footing than it ever was before.
Forgiveness doesn't just rescue a relationship, but actually makes it better. tweet this!

Sometimes people lend money to friends or family members to help them through hard times. People who are especially shrewd with money might also attach interest to the loan in order to motivate the borrower to repay it quickly, or simply to make little bit of money on the deal. But that’s a dangerous practice that God warns us to avoid.

There are dozens of places in scripture where God forbids usury and lending at interest. For today, we’ll focus on just one. In Deut. 23:19-20, God makes it clear that His people should not loan money to each other at interest:

19 Do not charge a fellow Israelite interest, whether on money or food or anything else that may earn interest. 20 You may charge a foreigner interest, but not a fellow Israelite, so that the Lord your God may bless you in everything you put your hand to in the land you are entering to possess.

The injunction against charging a brother interest is clear here. What’s fascinating is that fact that God did allow the Israelites to charge interest to a foreigner, but he didn’t allow interest to be charged to a compatriot. This reinforces what we’ve been saying about debt and relationships: God prohibited the Israelites from charging interest to each other because He knew that it would warp their relationship and cause disunity among the people. The principle holds true today: Exploitative debt is both wrong and dangerous.
Exploitative debt is both wrong and dangerous. tweet this!

3) Forgiving others unlocks forgiveness for you.

Ultimately, any discussion about forgiveness will ultimately circle back around to Jesus Himself. Through His work on the cross, Jesus purchased forgiveness for all of us who accept Him. But accepting that forgiveness requires that we forgive others, too.

Jesus makes this clear in the parable of the unmerciful servant, which you can find in Matthew 18:21-35. The whole passage is worth a read, but let’s focus on verses 32-35, where the Master chastises a servant who was forgiven a huge debt, but then ruthlessly pursued a fellow servant for a small sum of money.

32 “Then the master called the servant in. ‘You wicked servant,’ he said, ‘I canceled all that debt of yours because you begged me to. 33 Shouldn’t you have had mercy on your fellow servant just as I had on you?’ 34 In anger his master handed him over to the jailers to be tortured, until he should pay back all he owed.

35 “This is how my heavenly Father will treat each of you unless you forgive your brother or sister from your heart.”

Here, we see two things clearly: God forgives us our debts, and He expects us to do the same.

If you have loaned money to someone and are considering what to do next, understanding what the Bible says about forgiving debt should make a big impact on your decision. God forgives us infinitely, and He expects us to do the same for others. 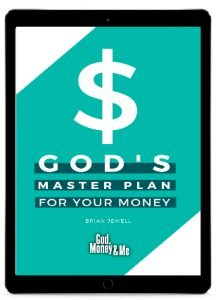 What else does the Bible say about money?

Figuring out what the Bible says about forgiving debt is just one of the many financial questions you’re likely to face in life. But you’re not alone — God has a lot to say about how to handle your money.

For years, I’ve been helping people find financial freedom in God’s word, and I would be honored to do the same for you. My free e-book, “God’s Master Plan for Your Money,” is full of encouragement and practical tips to help you start your own journey to financial freedom. You can get your copy instantly by filling out this form:

God has great things in store for your financial life. I can’t wait to join you on the journey.