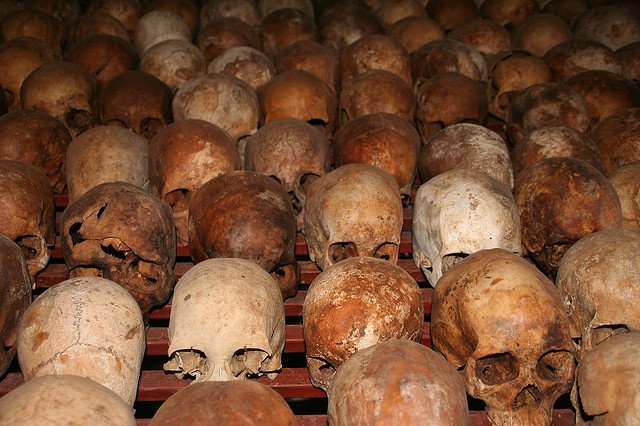 It’s an ugly but undeniable fact: At its root, all poverty is caused by sin. Sometimes that means the misdeeds of one person, and the consequences of bad decisions that leave them in difficult financial circumstances. Other times, the sins of an entire society cause some or all of its people to live in poverty.

When we first wrote about the relationship between sin and poverty, it caused a bit of a stir (so we published a second article  to explain the principle in greater detail). It’s not just theory, though; there a bunch of concrete ways that bad behavior can cause poverty in your own life. Today, we’re going to approach the problem from a macro point of view, and discuss some of the ways that a whole society’s sin can cause poverty.

Some people may struggle with the idea that a whole society can be in sin — after all, we are all individuals with our own free wills and consciences. And while it’s true that your neighbor’s sin does not condemn you before God, the attitudes and behaviors that become most pervasive among a group of people will ultimately be the ones that set the course for the group’s future. A culture that honors God and lives by His commandments will thrive, while a society that tolerates injustice and abuse will ultimately crumble.

The crumbling of immoral societies happens in all sorts of ways, and financial hardship is only one of them. And to make matters more unfair, sometimes the sins of a society can cause poverty for innocent people. (But then again, sin is always unfair.)

So how does this phenomenon work? Here are five  ways that society’s sin can cause poverty. Often, you’ll find that these things happen in sequence, starting from bad and progressing to unthinkable. As the progression goes, the financial fortunes of the people deteriorate  into shocking poverty.

They may seem like small things, but attitudes of arrogance and ignorance can make a big impact on a society. When people decide that they know what’s best for themselves, they become intentionally ignorant of the principles that God created to rule our universe. Among those are the principles of money and prosperity, sowing and reaping, giving and receiving, etc. When this happens, you see people make rash financial decision based on impulsive desires instead of solid wisdom. Personal and national debts grow. People lose sight of financial wisdom at the same time that they lose sight of the rest of God’s laws.

God outlines His plan for financial success along with all of the other laws and principles that He gives us in the Bible. Societies that follow His laws enjoy financial prosperity, along with all of the other blessings that He promises. But in many places around the world, arrogance and ignorance have led entire groups of people live in open rebellion to God and his commandments. In a world of moral relativism, the Bible becomes very unpopular, and people reject all of its wisdom — including its financial wisdom. In the end, a culture that turns its back on God and His laws also walks away from the provision that He gives.

Pervasive greed goes hand in hand with moral rebellion — in a society where people are no longer governed by the laws of God, many people judge themselves only according to the false authority of the almighty dollar. When there is no right and wrong, there is no reason not to pursue the greatest wealth possible, and nothing to restrain you from harming others in the process. This environment is a breeding ground for greed. And the insidious thing about one person’s greed is that it often causes another person’s poverty. In a society of pervasive greed, some people are going to get incredibly wealthy, but they often do it by oppressing the poor. A culture full of greed is also sure to be full of victims.

When moral law is abandoned and greed begins to pervade a society, a nation’s government is all but certain to become corrupt. After all, rulers are in powerful positions with the potential to acquire a lot of wealth through bribes, theft and other unscrupulous actions. Without the fetters of justice and conscience, the unrighteous ruler will be motivated by greed to do just that. We often see this in the form of governments that over-tax, manipulate and abuse their people. Sadly, many governments in poor countries divert and consume all of the aid that prosperous countries send them, keeping food, supplies and money from their starving citizens.

No society will put up with greedy, abusive and corrupt rulers indefinitely — eventually the oppressed citizens will rise up in revolt. When this happens, it leads to some of the ugliest events in human existence: war, genocide and destruction. Money-drunk rulers cling to power and eliminate any voice that speaks out against them. That may happen in the form of a civil war, a war with another nation, or even a genocide that systematically kills huge populations. War and genocide leave a swath of destruction and poverty in their wake. The poorest people in the world are the ones who live in war-torn regions.

Left unchecked, the wrong attitudes of a people can snowball into a nightmare scenario that devastate entire nations. And lest you think that these things only happen in the third world, let me say bluntly that the same sin can cause the same consequences in the wealthy West as well.

As the old saying goes, “There but for the grace of God go we.”