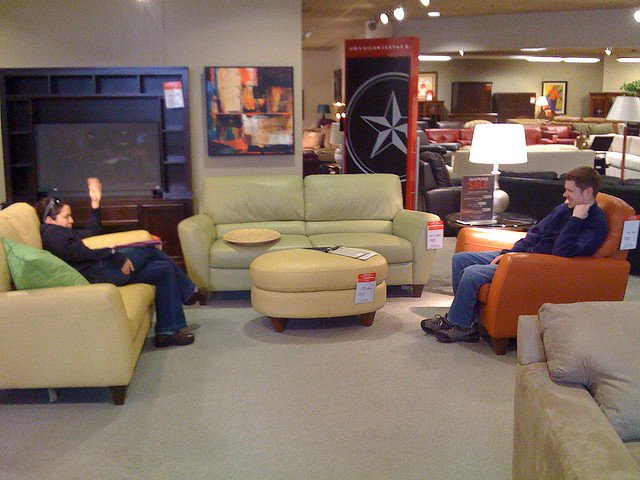 You’ve seen the offers in ads for electronics stores, furniture stores and other retailers of big-ticket items:  “Ninety days same as cash!” “Buy today, and pay nothing until 2015!” “No down payments and no interest for one full year!”

There are a bunch of different ways to package the idea of interest-free financing, but they all basically work the same way. A retailer offers to finance a purchase without charging you interest if you will buy from them today. It can seem like a great deal —  you get the sofa or TV that you want now, and you don’t have to worry about interest on the loan making the deal more expensive. But lurking in the fine print of these deals are terms that can make them much more costly than you realize.

Here at God, Money & Me, we’re no fans of debt. Borrowing money traps us in financial slavery, and it makes everything that you buy more expensive. Interest-free financing plans can sound like a good way to borrow money while avoiding the pitfalls of debt, but for most people, they’re actually bum deals. With deals like this, there’s always a catch, and that catch can bite you big-time if you’re not careful.

How does an interest-free financing deal work? Let’s say that you want to buy a new set of living room furniture that will cost about $2,000. You don’t have that kind of cash on hand, but the furniture store has a promotion for you: Buy today, and you can get financing with no interest for a year. The store (or one of its bank partners) loans you the money for the furniture, and you make monthly payments on the loan. If you pay the loan off by the time a year is over, then you’ve just borrowed money free of charge.

The problem is that most people don’t pay off the balance of the loan within the interest’free period, and this where things get interesting. You might think that if it takes longer than a year to pay off that furniture, you’ll only start accumulating interest charges beginning in month 13, but that’s not the way these deals work. Almost all interest-free financing deals are set up to charge retroactive interest if you fail to pay off the loan in the promotional period. That means that if you go a day over one year on this deal, the lender charges you interest for the entire “interest-free” period. That interest is often charged at a high annual rate — sometimes 25% or more — which means that you can instantly incur $500 of back interest charges on your $2,000 furniture purchase.

This little trick is often hidden in the fine print of interest-free deals, which can make them really surprising to consumers. The only way to get out of an interest-free financing deal without actually paying any interest on the loan is to pay off the entire balance before the promotional period runs out. But that takes a significant amount of discipline to pull off.

If you’re thinking about taking up one of these deals, you may have the vague thought that you’ll be able to pay off the loan before any interest comes due. But consider this: If you really had that kind of discipline, would you need to be borrowing money for the purchase in the first place? The fact is that most people don’t have that kind of discipline, even if they think they do. That vast majority of people that take interest-free financing deals end up paying interest on the transactions because they can’t pay off the loan on time.

Here’s another way to think about it: These deals are all over the place today, and we know that banks and retailers wouldn’t offer them if they weren’t profitable. In order for the deals to be profitable for the lenders, there has to be a steady stream of people who pay interest on the loans. Look at it statistically, and you see that the average person is probably going to end up paying some interest in the deal. If they weren’t the bank wouldn’t offer the deal.

It takes extraordinary discipline to make it through an interest-free financing deal without actually paying any interest. So instead of rolling the dice, why not just use that discipline to save up the cash you need for that furniture, TV or appliance purchase? Instead of making payments to the lender for a year, with the risk that you may end up socked with interest, why not make those same payments to a savings account? Yes, you’ll have to be patient and put off your big new purchase for a while. But in the end, when you pay cash for that item you want, you can do so without any danger of falling into an interest trap.