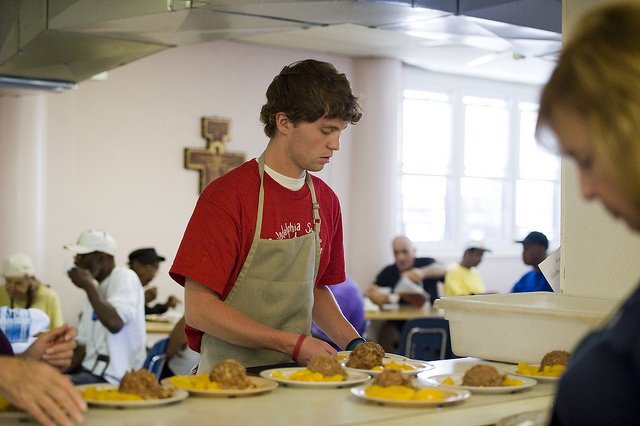 If it’s not the government’s job to take care of poor people, then who should be doing it? I’m looking at the man in the mirror.

Today, most Western countries spend a sizable amount of their national tax revenue on social welfare and programs that provide food, shelter, health care and other necessities for the poor. And although there’s a noble sentiment behind this spending, I don’t believe that this is the way that God intended for the poor to be cared for. Taking care of social needs isn’t the mandate of government; it’s one of the essential roles of God’s people.

In our last article in this series, we took a look at the relationship between money and government, and saw how social welfare programs short-circuit the process of generosity and blessing that helps poor people rise above their current circumstances. Today, we’re going to take that idea to its important conclusion — it’s not the government’s responsibility to provide for people’s needs. It’s yours and mine.

This is a case that’s easily made from scripture. In fact, there are over 100 verses in the Bible that talk about caring for the poor, and taken together the spell out a very clear picture: God has always intended for His people to take care of the poor.

We won’t go through the entire list of scriptures on the topic (although there’s a good one here if you’re interested in further study). Instead, let’s look at key passages that highlight the idea directly. We’ll start with Deut. 15:11, a passage from the law that God gave the Israelites in the Old Testament.

There will always be poor people in the land. Therefore I command you to be openhanded toward your fellow Israelites who are poor and needy in your land.

Later in Deut. 24:19-21, God gives instructions about how farmers were to leave some produce behind in their fields in order for the poor to be able to harvest food for themselves.

These passages from the Law demonstrate how caring for the poor was part of God’s design for Israel. Later on, King Solomon had a lot to say about the subject in the book of Proverbs. We’ll start with Prov. 22:9.

The generous will themselves be blessed,
for they share their food with the poor.

Proverbs 28:27 continues along the same theme:

Those who give to the poor will lack nothing,
but those who close their eyes to them receive many curses.

The New Testament has plenty to say on the subject as well. Jesus taught in Matthew 25:34-40 that taking care of the needy was one of the most important ways for His followers to serve Him:

34 “Then the King will say to those on his right, ‘Come, you who are blessed by my Father; take your inheritance, the kingdom prepared for you since the creation of the world. 35 For I was hungry and you gave me something to eat, I was thirsty and you gave me something to drink, I was a stranger and you invited me in, 36 I needed clothes and you clothed me, I was sick and you looked after me, I was in prison and you came to visit me.’

40 “The King will reply, ‘Truly I tell you, whatever you did for one of the least of these brothers and sisters of mine, you did for me.’

The early church took these teachings to heart, and made caring for the poor a central part of of their ministry. Acts 4:32-35 demonstrates the lengths they went to, and how God provided for them in this:

32 All the believers were one in heart and mind. No one claimed that any of their possessions was their own, but they shared everything they had. 33 With great power the apostles continued to testify to the resurrection of the Lord Jesus. And God’s grace was so powerfully at work in them all 34 that there were no needy persons among them. For from time to time those who owned land or houses sold them, brought the money from the sales 35 and put it at the apostles’ feet, and it was distributed to anyone who had need.

There is much more Scripture that we could look at, but I think that you get the point. God cares tremendously about the poor, the fatherless and the widow, and He gives us very clear instructions about taking care of them. And He also blesses us when we do. It amazes me to see what the passage in acts says: “God’s grace was so powerfully at work in them all that there were no needy persons among them.”

God has a plan for dealing with poverty, and that plan is based on the generosity of His people. Instead of waiting for the government to take care of the poor people in our communities, shouldn’t we be figuring out how to care for them ourselves?