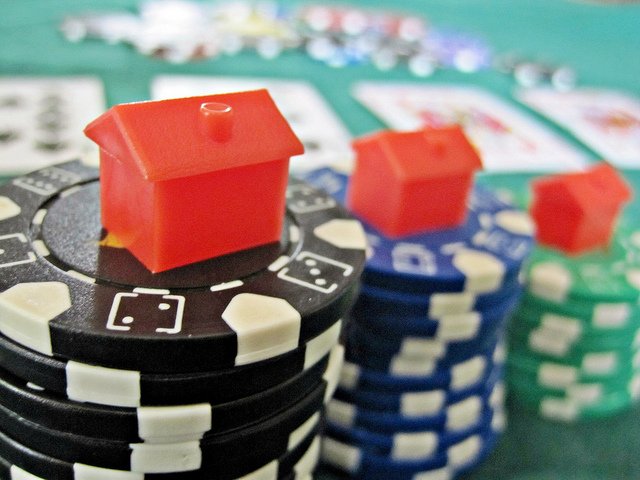 We need to tell the lottery to change its slogan: “Somebody’s gonna lose… and it will almost certainly be you.”

Whether it’s Powerball, online poker, your local racetrack or one of the hundreds of casinos around the country, there are more ways to gamble these days than ever before. And every one of them is a rip-off. No matter how “lucky” you think you are, gambling with money will make a loser out of you.

Money is a serious subject, and its power over our lives is pretty incredible. If we’re not careful, money can make slaves of us in all sorts of ways. And having wrong attitudes about money can lead us into all kinds of trouble. In this new series entitled “Money Traps,” we’re going to examine some of the ways that these bad habits and cultural lies can wreak havoc on our financial lives. Gambling is a perfect example.

If you’re not familiar with these ideas, let’s start with some background. Almost all commercial gambling in the world is run by governments, corporations and other large entities that are looking to make money. No matter whether you’re playing slots, buying lotto tickets or betting on a sports event, the organization facilitating your game is in it to make money. The only way that they’re going to make money is by taking in more than they pay out. And the only way to do that is to make sure that their customers lose more than they win.

Do you remember going to carnivals or amusement parks as a child and seeing the midway games? Their big colorful prizes were pretty enticing, and the simple nature of the games made it look like they would be easy enough to win. But if you ever played one, you probably learned that it wasn’t easy at all. The simple appearance of the game on the outside was deceptive; something about the way the materials were made or the playing area was arranged made it very difficult to win. For all intents and purposes, the game was rigged in the owner’s favor, and the only way for you to ever get the big colorful prize was to spend a lot of time and money trying over and over again until you got lucky.

Maybe you remember the “claw” machines that lived in pizza parlors and video arcades. It looked simple to manipulate the claw with a joystick and maneuver it over to the expensive, high-tech prize inside the big plastic pit. But of course, the claw never picked up the good toy. It usually picked up nothing at all, and if you did get anything it was a crappy stuffed animal. The game lured you in with the promise of big prizes, but was rigged to take your money and leave you empty handed.

At its heart, all gambling works the same as the midway games or the arcade claw machines. Casinos, racetracks and lotteries attract players with the glamorous images and promise of big winnings. But because these establishments control the games and make the rules, they can rig the games so that they are winning the majority of the time. And if they’re usually winning, that means that you’re usually losing.

Of course, the way these things work out can be pretty subtle. Owners know that nobody would gamble if they never saw anyone else winning, so they build games in such a way that some people win some of the time. If you play a slot machine for a while, for example, you’re going to win small amounts of money on some of your spins. But those wins are the bait on a very big hook; the casinos let you win just enough to make you think that your big score is right around the corner. But it never really is. And at the end of a session, the amount of money that you’ve lost will outweigh the small amount that you’ve gained in bait winnings.

Each form of gambling has its own odds, but they are never in your favor. Games like roulette and craps are big money pits, and the odds of winning the lottery are worse than the odds of being struck by lightning. Some things like slot machines or horse races pay out better, but they don’t come close to 50-50 odds. And even so-called “games of skill” are stacked against you: Although it would seem that blackjack or poker would be fair for everyone at the table, casinos structure their operations and dealers’ rules in such a way that the house has an edge of a few percent.

A few points below 50% odds may not seem like a big deal, but it is. People make the mistake of thinking of each bet they make as a separate event, and weigh the chances of getting rich on that bet. But gaming institutions don’t make their money on single events; they make their money in aggregate, and you should think about gaming in aggregate too. Even though you might win something 45% of the time, you’re going to lose something 55% of the time. If you play habitually over time, the statistics mandate that your career record will add up to a loss, no matter how many times you win.

It doesn’t take much research to find out what a bum deal gambling is. So why do people do it? At its core, gambling is a reflection of a wrong attitude about money. People who gamble have a deep-seated belief that they can get something for nothing. Gambling comes from the idea that we can make money from other people without doing any work for it.

But of course, real life tells us that this is hogwash. We know that money comes from serving people, and that the only way to make money grow is to gather it little by little. Gambling is a rip-off because the premise behind it is a lie. You can’t get something for nothing, and all of the marketers, promoters and advertisers who would like to make you think that you can are really looking to take money from you.

Casinos, horseraces, lotteries and all other forms of gambling are money traps. At best, they’re going to lighten your wallet by a few bills; at worst they can send you spiraling into an addiction that can ruin your financial life. Do yourself a favor next time you see an ad for one of these things: Turn the page or change the channel.

Photo by Images of Money. Used under Creative Commons License.