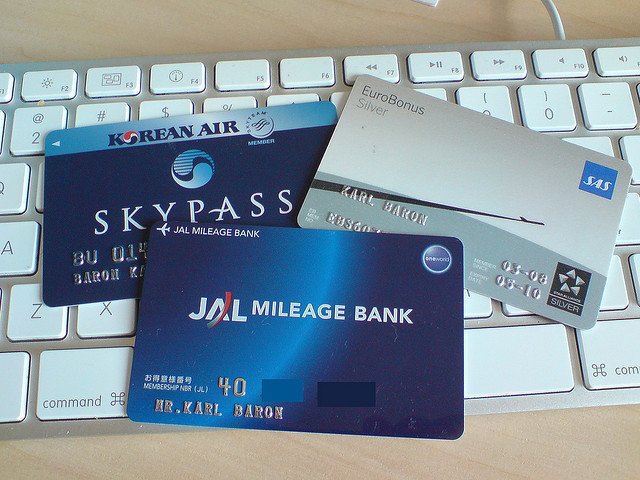 There’s a warm beach somewhere with white sands, turquoise waters and impossibly sunny skies. You could be lounging on it with a drink in your hand and your soul mate by your side… if only you had enough frequent flier miles to fly there free of charge.

In this cold and dreary time of year, a free getaway to that unnamed tropical destination can be awfully appealing. Airlines and credit card companies try to use that appeal to entice you to sign up for co-branded credit cards that will help you earn frequent flier miles. The theory is that you can earn enough miles in your everyday spending to redeem them for free vacations. But in practice, this works for only a very few people — for average folks, these airline credit cards are just a bum deal.

In the past few months we’ve been using this section of God, Money & Me to tackle some of the bad consumer credit products on the market today. Some of them — like these, these and especially these  — prey on the ignorance and desperation of the poor to trap people in cycles of despicable debt. Others aren’t quite so heinous, but still charge usurious interest rates that constitute massive rip-offs (learn more here, here, here and here). Today we’re introducing a new category of credit products: They’re not criminal or dishonest, and they don’t involve a massive rip-offs. Instead, they’re just bum deals. Airline credit cards are a perfect example.

Before we go any further, you may protest: You have an uncle, a friend or a coworker who uses a credit-card that is co-branded with an airline frequent flier program, and that person uses miles to take free flights quite often. So the programs work, right? Not necessarily. Though the programs work for some specific kinds of people, they’re not likely to work well for you.

More on that later. Let’s step back and talk about how these programs work. They originate with credit card issuers (banks) who are looking for a way to make their products attractive to consumers. They find airlines that have frequent flier programs full of people eager to earn miles. The two companies strike a deal, and the airline sells huge blocks of miles to the credit card companies, who in turn give those miles to people that use their cards. Most of these banks award one mile for every dollar spent on their cards.

How does all this work out? The math has two components to it. The first is that frequent flier miles have a very tiny cash value — the real cost to an airline of providing a frequent flier ticket usually works out to much less than a penny per mile. The second component is that the issuing bank stands to make a lot of money off of the credit cards they issue through annual fees, merchant commissions and interest rates. Those revenue streams give the bank more than enough money to pay for the miles that they give to their customers.

Unfortunately, it’s those same factors that tend to make these credit cards a bum deal for consumers. Here are a few of the considerations that make these cards questionable.

If the bank is going to spend some money buying miles from an airline, they’re going to find a way to pass that cost on to you. One of the chief ways that they do this is with an annual fee. On almost all of these cards (as well as many other kind of co-branded “reward” cards) you have to pay a yearly fee to the bank just for the right to have their card, whether you ever use it or not. Depending on the kind of card you have, those fees can range from $75 to $400 a year. Those fees make these cards much more expensive than garden variety credit cards, which have no annual charges. And they make the free flights that you’re hoping to earn a little “less free.”

Another way that banks make up the money that the spend to provide you with miles is by charging you higher interest rates on the purchases that you make with their credit cards. If you pay off your balance faithfully each month, this isn’t much of an issue. But most Americans don’t pay their balances off each month; in fact, most American families carry more than $7,000 in credit card debt. With that kind of debt, the extra few percentage points that the airline cards charge you can amount to several hundred dollars more in interest payments each year, and several thousand more over the life of the loan. Those fees quickly wipe out any savings you would have on frequent flier redemption trips.

The dirty little secret of airline credit cards (and frequent flier programs in general) is that the points you earn are practically worthless, and they become less and less valuable every day. There are a host of reasons for this — many more than we can get into here — but the key issue is supply and demand. You see, there’s an ever-growing number of  people with frequent flier accounts earning miles, but the number of available seats on airplanes around the world is fairly static. In other words, the demand is growing, but the supply is not. So the airlines continually raise the number of points that it takes to get a free flight, thus diluting the value of existing points.

Ten years ago you could get a domestic flight for around 25,000 miles, but those days are long gone — you’re looking at 40,000 to 50,000 for flights in the U.S., and more to go abroad. If you use a credit card to earn those miles, accumulating one mile for every dollar you spend, you’ll have to spend $50,000 just to get one “free” flight. It will take most families several years to rack up that much credit card spending… all while paying annual fees and high interest rates.

Airline-branded credit cards are a bum deal for most people because they’re expensive and their rewards are mostly wishful thinking. But there is a certain class of people that can benefit from these cards: actual frequent fliers. You see, when the airlines created their reward programs decades ago, they were aimed at people who truly did travel frequently (mostly on business). The free flights and other awards that they offered were a relatively inexpensive way to thank customers who did thousands of dollars worth of business with them a year. True frequent travelers are the only people who ever get good rewards out of these programs. While anyone can open an airline account, the fact remains: Unless you truly do travel frequently, it will take you forever to rack up enough points to take even a modest free trip.

So, the uncles, friends and coworkers that you know who get free flights from their credit cards? They’re probably actual frequent travelers. If you travel a lot for business, these cards can help you accumulate miles faster. When used in combination with actual mileage earned for flights they’ve taken, the cards can bump a frequent traveler up to a mileage level that does allow them to take a free trip or two each year. But unless you’re really a frequent flier — traveling more than six times a year — you’ll never earn enough miles on an airline card to make it worthwhile.

Full disclosure: I actually carry and use an airline credit card, as my job requires me to travel once or more a month. I am the exception, however, and not the rule. Unless you travel frequently, stay away from airline credit cards.