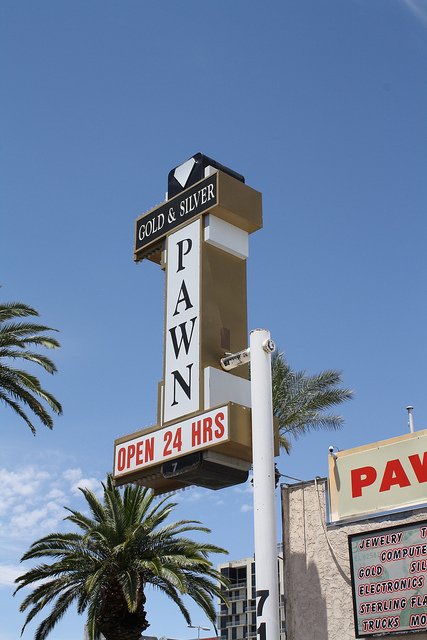 The guys from Gold and Silver Pawn Shop in Las Vegas took the nation by storm when their TV show “Pawn Stars” debuted on the History Channel in 2009, quickly becoming America’s favorite “reality” show. And while I join millions of people who tune in to see the crew’s antics and antiques every week, I also have to stop and ask myself a question: Are pawn shops a good thing, or are they just another purveyor of Despicable Debt?

We’ve spent the last month or so beating up on some of the nation’s worst lenders — people who take advantage of the ignorance and desperation of the poor and trap them into exploitative debt deals. Payday lenders, title lenders and tote-the-note car dealers are scummy dudes who use scummy tactics to make big money off the poor. Last week, we took an in-depth look at the practices of subprime lenders, and decided that their regulations and practices spared them from the Despicable Debt title.

So, what about pawn shops? These institutions are certainly frequented by people who need quick cash or who are otherwise down on their luck. And a savvy pawn shop owner can make a lot of money. So does the pawn business qualify as Despicable Debt?

We’ll answer that question in a minute. First, for those of you who may not be familiar with the practice, let’s talk about pawning and how pawn shops work. Essentially, pawn brokers loan money to people that need cash. To make that loan, however, they require the borrower to give them some kind of collateral on the spot.  If the borrower pays back the loan and the interest on the loan, they get their collateral back, and the deal is done. If they don’t pay it back within the agreed-upon time, however, the borrower forfeits their collateral, and the pawn broker sells the item in his shop to whoever wants to buy it.

Let’s look at an example. Say you need $500 to have your car repaired, and you don’t have that much cash to work with. What you do have, though is a guitar that is worth about $1,000. So you take the guitar down to your local pawn shop, and explain your situation to the broker. He’s going to appraise your guitar, and if he agrees that it’s worth about $1,000, then he’ll agree to loan you some money against the guitar. But he can’t loan you the full $1,000; he may offer you $500 or $600 for it. If you decide to take the loan, then you leave your guitar with him, take the cash and have your car fixed.

Now, you don’t have to say goodbye to your guitar forever — you have the potential to pay back the money and take your guitar back home. The rules vary from state to state, but laws governing the pawn business require that you have a set period of time (typically about 90 days) to pay back the loan, plus the interest that the pawn broker charges (often about 10 percent). So, if you can come up with $550 in the next three months, you can go back to the pawn shop, pay the loan off, and take your guitar home. The pawn broker can’t do anything with your guitar until that period passes. If you can’t pay back the loan after 90 days, though, he’s going to put it up for sale in his shop. That means that anyone who wants it can come in and buy it. You’re also welcome to come buy it back at that point too. But the price tag is going to be a lot higher than the $500 that you borrowed; once the guitar goes up for sale to the general public, the pawn broker is going to ask for the guitar’s full $1,000 value, even though he paid you much less than that for it.

Now that we understand how pawn shops work, it’s easy to see why many people hate them or feel like they’re exploitative. Pawn brokers make their money off of people who are in a bind and need cash quickly — in other words, their primary customers tend to be poor. And when a pawn broker sells an item in his shop for twice what he paid the borrower, it certainly seems like he’s making a big profit, which can strike some people as unfair. Many people  refuse to buy things from pawn shops because they feel like they would be trading on someone else’s misfortune. I understand that sentiment, and wouldn’t blame anyone for feeling that way.

But are pawn shops as bad as payday lenders and other vendors of Despicable Debt? I’ve thought a lot about it, and I’ve come to the conclusion that they are not. In fact, I think that I might like the pawn businesses better than just about any other form of lending out there.

Why? Because pawn lending doesn’t trap anyone in debt. The thing that makes debt so financially dangerous is that it follows you around throughout life until you’re able to pay it off, taking a bite out of your budget every month along the way. And the thing that makes Despicable Debt so terrible is that those lenders intentionally trap poor people in a debt position that they’ll never be able to escape.

But pawn brokers don’t trap anybody into anything. By the very nature of the business, you can never be “in debt” to a pawn shop. You can never roll over a balance from month to month, and you can never have a mounting total of interest, fees and other payments. The proposition behind pawn is simple: If you are able to pay back the loan and interest, fine — you’ll get your item back. If you never pay it back, though, no sweat. The pawn broker will still make his money back by selling your item. And you’ll walk away debt-free.

Pawn shops are a great example of a business that serves the poor without trapping them in long, inescapable cycles of debt. You may not like the idea of someone parting with a dearly beloved piece of jewelry or a family heirloom to get some quick cash. But if you’re able to separate the emotions from the transaction, you realize that pawn is a pretty fair deal for all parties involved. If you need quick cash, it’s certainly better to pawn a valuable item than it is to take out a payday loan.

Of course, the ultimate goal of good financial planning is to avoid the need for pawn or other borrowing altogether. A good budget and a solid emergency fund will save you from a lot of life’s financial calamities. Manage your money well, and the only time that you’ll ever visit a pawn shop is when you’re shopping for a bargain on used merchandise.