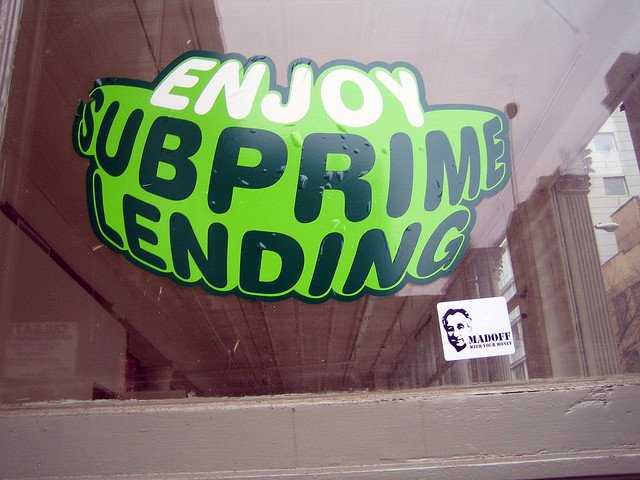 Does all subprime lending qualify as Despicable Debt?

For the past few weeks, we’ve been having some fun bashing the purveyors of Despicable Debt: folks like payday lenders, title lenders and tote-the-note car dealers who enrich themselves by preying on the desperation and financial illiteracy of the poor. There’s no place in honorable society for that kind of abusive behavior, and the people that practice it deserve the full weight of our scorn.

But talking about this area of debt brings us to a difficult question: Should all subprime lending qualify as Despicable Debt? After all, the aforementioned creeps aren’t the only people that make high-interest rate loans to people with less-than-perfect credit. Plenty of traditional mortgage lenders, credit card companies and other banks extend credit to subprime borrowers, and charge them significant amounts of interest. So is there an inherent difference between subprime lending and Despicable Debt?

That’s a difficult question to answer, but after a lot of thought and consideration, we’ve decided that the answer is yes. While we’re no fans of any kind of debt, we’re not willing to go so far as to lump traditional bankers who make some subprime loans in with the aggressive and exploitative purveyors of Despicable Debt.

What sets these two groups apart? The difference is in the business model. But before we get into details, let’s talk a little bit about subprime lending. You may have heard that term a lot in the past five years or so — subprime mortgage loans were one of the factors that caused the financial collapse of 2008. But unless you’ve studied finance and lending, you may not know exactly what the term “subprime” means.

When traditional lending institutions like banks make loans, they want to make sure that the people they’re lending to can pay the money back on time. To do that, they use a number of criteria to qualify potential buyers — they look at things like your employment history, your current income and your credit score to determine how likely you are to pay the money back on schedule. People with good incomes and credit scores are considered well qualified, or “prime” borrowers. But people who have a spotty track record may not make the cut as “prime” borrowers. Instead, they’re considered “subprime.”

Subprime doesn’t mean that the borrower is entirely unable to pay back the loan — it just means that there’s a little bit more risk involved in lending them money. Many banks will still lend to subprime borrowers. To do this, though, they charge more interest than they do on prime loans. The added interest helps to cover the additional risk that they are taking. If a few subprime borrowers fail to pay back their loans, the extra interest that the bank makes on the other subprimes that do pay on time will cover the losses on the loans that default.

So, now that we understand subprime lending, let’s get back to the question of what makes subprime lenders different than the Despicable Debt lenders. Both of these groups lend to less-qualified borrowers at high interest rates. But there is a key difference between them, and it can be found in the business model: Subprime lenders make the most money when their borrowers succeed — that is, when they pay the loans back on time. Despicable Debt lenders make the most money when their borrowers fail. In fact, the often set their customers up for failure.

Subprime lenders lend money to folks whom they think will pay the money back, but who haven’t always had a great track record in the past. If the borrower succeeds in paying back the loan on time, the lender will make money on interest. If they fail and default on the loan, the lender will foreclose on the home or repossess the car in order to sell it and cover as much of their losses as they can. But very often, the bank still ends up losing some money on the deal when a subprime borrower fails. Simply put, it’s not in the bank’s interest for a borrower to default.

Despicable Debt sellers, on the other hand, do best when their borrowers fail to pay back the loans on time. Payday lenders advertise low-cost loans that can be paid back within two weeks. But hardly any of their customers actually pay the loans back two weeks later on payday. Rather, they end up rolling the loan over month after month — or even year after year — racking up huge interest and penalty charges that can dwarf the original loan amount. Payday lenders know that this  is going to happen; in fact, they count on it. They make a lot more money off of people who carry their loans over than the off of the few who actually pay the money back within two weeks. If everyone paid the loans back on payday, payday lenders couldn’t stay in business.

Similary, title lenders count on the fact that many of their customers won’t be able to pay the loans on their cars, or at least won’t be able to pay them on time. When a borrower gets behind on one of these loans, the lender takes the car and sells it, making much more than what he lent to the borrower. Tote-the-note car dealers take this strategy one step further, repeatedly selling cars to customers who won’t be able to make the payments for long. This allows them to repossess and sell the cars over and over again, making money repeatedly by selling the same over-priced car to different buyers, then repossessing it when they fall behind on the payments.

Despicable Debt sellers aim at the poorest and least-qualified buyers in society, and often don’t require any credit checks to lend to their customers. They do this because they’re not interested in seeing the customer pay back the loan on time. It’s in their best interest for their customers to fail. They set people up for failure. And that’s what makes them so despicable.

Subprime lenders, on the other hand, have to deal with some failure, but it’s not what their business is based on. Subprime lenders only make money when their borrowers pay on time. They succeed when their customers succeed. That’s a much more honorable business model — and it’s the reason why we don’t beat up on traditional subprime lenders the same way that we do on those other guys.

Of course, none of this changes the most fundamental fact about personal finance: All debt is slavery, no matter who sells it to you. There’s no such thing as good debt. And it’s almost always better to save and pay cash for something than to borrow money to finance your purchase. If you want to really succeed with money, you’d do best to avoid debt altogether.