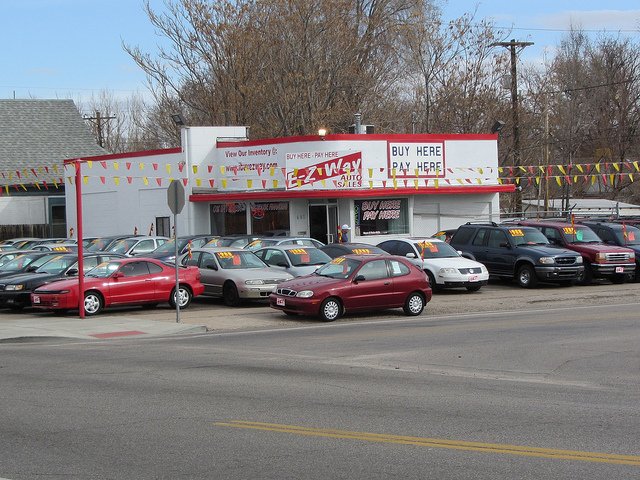 It sounds like a wonderful plan: You get a great new car with low payments, and you rebuild your bad credit along the way. But like anything that sounds too good to be true, tote-the-note car lots are almost always a bad deal wrapped in a pretty package.

Owning and operating a car is one of the biggest expenses that most Americans face today. Since most people don’t plan ahead to save the money that they’ll need to buy new cars, it’s common for people to borrow money to finance the purchase of new vehicles. That’s too bad, because it’s always a bad idea to borrow money to buy a vehicle. It’s an even worse idea to do so at tote-the-note car lots, where the only person who really wins is the dealer.

In this series called Despicable Debt, we’re take a look at some of the most nefarious kinds of lenders on the market. These people go beyond the methods of conventional, respectable lenders and prey on the desperation and ignorance of the poor and financial illiterate, trapping people in cycles of abusive debt that can take years to escape. We’ve already talked about payday lenders and title lenders; today, we’re looking at car dealers who take advantage of the poor with “buy here, pay here” financing.

This phenomenon in auto lending goes by a number of different names: Tote-the-note, dealer financing, buy here pay here, “everybody rides,” etc. No matter what you call it, this kind of transaction is a bad deal. Before we get to the details of what makes this so bad, though, we need to reviews some basic principles about auto financing.

When you buy a car at a traditional car lot, the dealer will often help you arrange financing as part of the transaction. The fact that the loan is set up at the dealership can make it seem like the dealer himself is loaning you the money, but that’s not the case. Car dealers work with a network of banks and lenders to set up financing for their customers. The dealer arranges for the bank to lend you money for the car (often earning a commission in the process), and then facilitates the transaction between you and the lender. Once you buy the car, you make payments to the lending institution (not the dealership) until you’ve paid off the loan.

In this traditional process, much of the lending is done by traditional banks, which means that they use traditional means to determine who is qualified for the loan — that is, who has the financial wherewithal to pay the loan back. This entails checking your credit score, your employment records, etc. If you have bad credit or don’t have a steady income, you’re probably not going to get approval for the loan.

This is where tote-the-note dealerships come in. There are a lot of people out there who want cars, but don’t qualify for traditional loans. To serve this market, low-end dealers set up shop in low-income neighborhoods. Instead of offering traditional financing through a bank, the dealer offers to finance the purchase himself. In other words, he “totes the note.” You buy the car from him, and then you pay him every week or every month  with a cash or check — thus the term “buy here, pay here.” Since the dealer doesn’t have to work with a bank, he can sell cars to people who don’t have good credit or good jobs.

This may not sound so bad, but as usual, the devil is in the details. The first problem with these places is that, like payday lenders, these dealer/financiers charge very high interest rates. Anytime someone with bad credit gets a loan, they’re going to pay a high premium in interest to make up for the risk that the dealer is taking. Today, well-qualified buyers are getting car loans at less than 2% per year in interest; dealer-financing often means interest rates of 10% or more. While that’s not quite exploitative, it’s certainly a bad deal.

The second danger of dealer financing is the quality of the vehicles available. All too often, these dealers sell sub-standard cars at prices above their fair market values. Since their customers are in tight financial straits and don’t qualify for traditional loans, these dealers have buyers in a vulnerable position, and can therefore mark the price of the vehicles up significantly. And since the dealers are handling the cost of financing themselves –and taking all of the risk — it’s not in their best interest to spend a lot of money acquiring quality automobiles. Often, they sell high-mileage, older vehicles that aren’t in the best of shape. Many of those vehicles have been traded in by some of their desperate customers. Others come from salvage yards and auto auctions, and may have been wrecked, rebuilt or otherwise compromised.

Third, and worst by far, is the fact that many “buy here, pay here” deals are designed to fail. That’s right, many deal-financiers don’t expect you to be able to make your payments on time. (After all, if you were able to, you wouldn’t have bad credit.) What they expect is that you’ll make your payments for a while, and then eventually run into financial trouble and default on the loan. When you do, they repossess the car, put it right back on the lot, and sell it again to the next desperate customer. In effect, the dealers get to sell the same car over and over again, scraping a good chunk of money off of each unsuspecting customer along the way. And since the dealer actually stands to make more money off of you defaulting than from you making your payments on time, it’s in their best interest to push you into cars that are too expensive for you and payments that are too big for you to really afford.

I hope that you’re coming to the same conclusion that we are here: Like all peddlers of despicable debt, tote-the-note car dealers take advantage of the financial illiteracy of the poor and the desperation of people who are in the middle of difficult life circumstances. They enrich themselves by digging poor people into deep debt, and then pulling their vehicles out from under them. It’s a genius scheme, but it’s also as wicked as can be.

Remember, there’s only one wise way to buy a car: Save money for your next car before you need it, and then when it’s time to make the purchase, never buy more than what you can pay cash for.