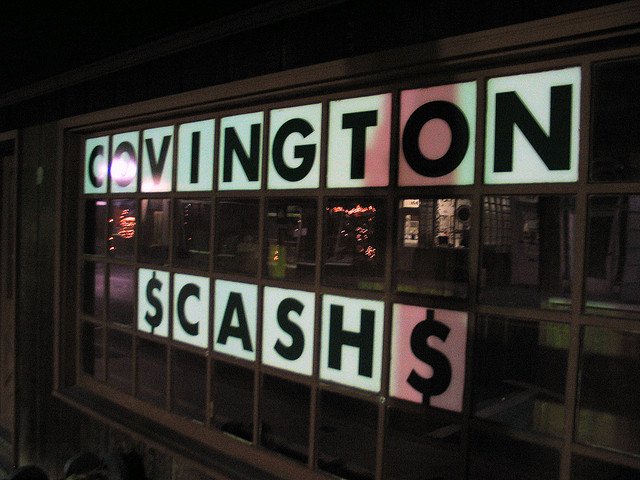 Although too few people realize it, debt is almost always a bad a idea. Of course, many people borrow and lend money with good intentions, looking to help people pay for school, buy a car, or do other things that may help them in life. And even though the debt may not be healthy, at least the folks that sell this debt are trying to be helpful, at least as much as they know how.

But some lenders don’t have good intentions. There are a lot of unscrupulous folks out there that understand the bondage of debt all too well, and use it to take advantage of the poor. These lenders use exorbitant interest rates to trap the financially illiterate into endless cycles of debt and interest. They’re part of an industry that I call Despicable Debt, and you should never, ever go near them.

Payday lenders are some of the best known purveyors of Despicable Debt in the country. Their products may go by a bunch of different names: Cash advance, payday advances, check-cashing services, etc. But their game is always the same — they take advantage of people’s desperate situations to trap them exploitative debt cycles. You almost always find these places in poor neighborhoods, and they attract customers who don’t know enough about money to understand that they’re about to get ripped off.

You’ve probably seen commercials for payday lenders on daytime talk shows or late night TV. Here’s how their pitch works: “Do you need cash now, but don’t get paid for another two weeks? Come see us! You can write us a check, and we’ll give you cash for it right now. Then we’ll hold your check and won’t cash it until payday.”

The ads make it seem like a safe, low-cost way to get money quickly. I drive past a payday loan shop from time to time, and see signs saying that you can borrow $200 and pay back $203. Seems like a fairly cheap deal, until you stop and do the math.

You see, the $3 fee represents 1.5% of the money that you borrowed, and that is due within two weeks of taking out the loan. In other words, you’re paying 1.5%  interest on the loan every two weeks. That translates into an annual percentage rate of 40% or more — an exorbitant interest rate that is far above the normal rates that legitimate banks charge.

And that’s only the beginning. Some people qualify for that 1.5% lending rate, but only the most-qualified borrowers. If you have poor credit or no credit, payday lenders are going to charge you even more for the same loan. It’s not unheard of for people to be charged interest rates that compute to more than 100% annually.

These ridiculously high rates are bad enough, but this situation gets even worse. Payday lenders know that their customers probably won’t be able to pay back the loans in two weeks; in fact, most people that use these services end up rolling the loans over month after month. As they do, they amass late fees and escalating interest. So someone who borrowed $200 may spend a year paying the loan back. By the time they do, they could be out $400, $500 or more. It’s a terrible cycle.

Fortunately, many local and state governments have begun to crack down on payday lenders, regulating the amounts of interest that they can charge. But government can’t stop these sleazebags from being sleazy. Payday lenders make huge money by preying on broke people who don’t understand the awful deal that they’re getting themselves into.

If you’re ever so desperate for money that you consider getting a payday loan, I would urge you to stay away from there. While no debt is good, payday loans are just about the worst kind of debt that you can incur. I would rather see you borrow money from a relative or a bank, or even take out a cash advance on a credit card. Not that any of those things are good, because they’re not. But payday loans are about as bad as you can get.

Payday loans are Despicable Debt because they take advantage of poor people. These loans make rich people richer, but they do so by making poor people poorer. They trap people in cycles of debt that can take years to escape. And they use people’s ignorance against them. This isn’t helpful to anybody.

I’ll leave you with with a passage from Proverbs 22:22-23 that sums up the reason why payday loans are Despicable Debt:

22 Do not exploit the poor because they are poor
and do not crush the needy in court,
23 for the Lord will take up their case
and will exact life for life.